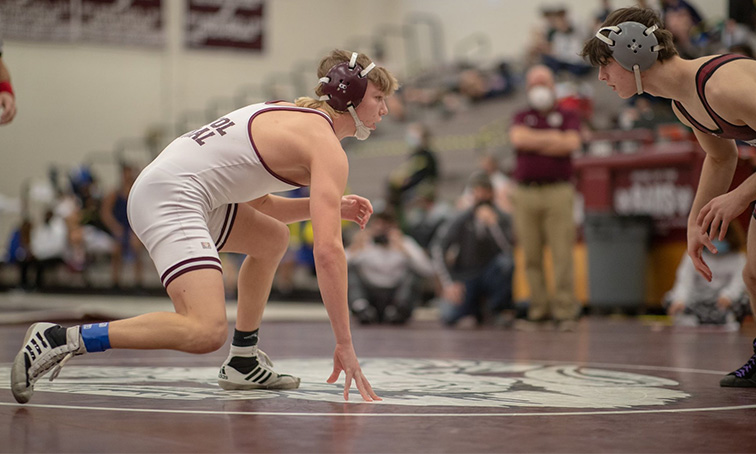 It came down to a half point at the 39th annual Bristol Central Invitational on Saturday.

It was the closest finish in the tournament history, breaking the mark set in the first year of the event in 1982 when Bristol Central outlasted cross-town rival Bristol Eastern by 2½ points.

Joe Mahoney (106), Justin Shay (113) and Thomas Bock (138) won individual titles for the Rebels with Mahoney and Shay each winning by pin in under a minute. New Milford had victories in the finals from Evan Lindner (126), Tynan Lim (132) and Max Piel (145) with Lindner and Lim winning with pins.

Berlin looked sharp with a third-place finish with 139 points – their best finish ever in the event. However in previous years, the Redcoats were usually hosting the Art Powers Duals on this weekend. Nick Ebrahimi won at 195 pounds for Berlin, who had three other finalists.

Hall, who was fourth with 135 points, had four finalists in the tournament while Canton, in their first-ever appearance, had three finalists.

Bristol Central’s William Hamilton was named the outstanding wrestler of the tournament. Hamilton went 3-0 with two pins to win at 125 pounds.

Bristol Eastern’s Ella Nichols became the first girl to earn a spot in the finals in the Bristol Central Invitational,  according to long-time tournament announcer Dave Greenfield. She finished to Pomperaug’s Michael Carpenter at 152 pounds.

Nichols beat Farmington’s Aidam Adams by technical fall, 17-1, in the quarterfinals and got a reversal with 1:02 left in the third period to beat Avon’s Chris Pascerelli in the semifinals, 4-2.

Nichols is ranked No. 9 in the country among high school girls at 152 pounds in rankings by USA Wrestling, the National Wrestling Hall of Fame and FloWrestling.

Pomperaug’s Julianna Morris finished fourth at the BC Invitational at 126 pounds. Morris is ranked No. 4 in the country at 127 pounds in the national girls rankings.

At the Casey Dane Yates Memorial Tournament at Lyman Memorial in Lebanon, Haddam-Killingworth had six individual champions to win the tournament for the first time with a 186-164½ win over Killingly. It’s the first tournament title for the Cougars since winning the Highlander Invitational in Portland in 2017. 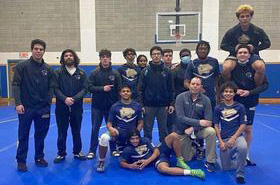 No team champion was crowned at the 16th annual Ray Southerland Memorial Duals at Southington High. With the late withdrawal of a team from Massachusetts, there were just 11 teams in the field so tournament organizers set it up to give each team four dual meets.

Ridgefield and Branford each went 4-0 on the afternoon. Ridgefield outlasted Fairfield Prep, 40-36 and slipped past host Southington, 36-33. The Tigers also beat Morgan, 58-18 and NFA, 60-24. Branford had four comfortable wins with the closest match being a 52-24 win over Greenwich. Branford also beat Maloney, Morgan and Conard.

Southington and Platt High each went 3-1 in the tournament. The host Blue Knights beat Greenwich on criteria, 43-42 along with wins over NFA, 57-21, and Fairfield Prep, 47-30.

But the three wins gave long-time Platt head coach Bryan McCarty his 500th career win. The came in the final match of the day for the Panthers, a victory over Hand.

McCarty, who has been the head coach at Platt since December 1990, becomes just the fifth coach in state history with at least 500 career victories. He joins an elite group that includes Killingly’s Rich Bowen, Derby’s Buster Jadach, Windham’s Patrick Risley and the late Jim Day from Berlin.

“I am very humbled,” McCarty said. “The win happened at the Ray Southland Duals, which brings even more meaning as he spent a year as a coach with me.”

Southland was a long-time official but he was also a teacher and administrator in the Meriden school system where McCarty has worked during his entire career.

“This was really unexpected as each day brings a level of uncertainty due to the pandemic,” McCarty said. “The kids were excited and the first two to congratulate me were West Johnson (current assistant) and Joe Winoski (a former assistant and current Maloney coach). It’s a very special moment in my career.”

Due to the increase in COVID-19 infections, there was limited attendance at tournaments this weekend. Spectators were limited to one spectator per wrestler at the Southland Duals in Southington. No fans were allowed at the Bristol Central Invitational or the Casey Dane Yates Memorial Tournament at Lyman Memorial in Lebanon.

Fans could watch the Bristol Central and Casey Dane Yates tournaments on YouTube. At Bristol Central, there was a camera mounted in the middle of all four mats that recorded all of the action. Viewers can direct the view to one of the four mats.

Xavier’s win over Danbury was also streamed by Xavier. Fans were allowed in the Xavier gym with masks.

No. 2 Xavier beat No. 1 Danbury on Saturday in Middletown with a 44-19 decision. The last Connecticut team to beat Danbury in a dual meet was New Milford with a 35-22 victory on February 6, 2015.

After that, the Hatters won 67 consecutive dual meets against Connecticut competition. Danbury did lost five dual meets during that period but there were all to out of state teams – Timberlane Regional in Plaistow, N.H., Nashoba Valley Tech in Westford, Mass.,  and Mt. Anthony Union from Bennington, Vt.

Notre Dame-WH finished sixth in the field of 11 teams from New Jersey, Maryland and Virginia. Notre Dame had four medalists including juniors Jimmy Lowman (195) and Josh Kuczynski (285) who each finished third.

Next year’s tournament will be a two-day event with 32 teams and Notre Dame has already committed to attend next year.