by Duong
in World

A Hong Kong newspaper owned by the Chinese Communist government fired off a string of articles last week accusing Christian churches of fomenting unrest during the 2019 popular uprising, strongly hinting at a crackdown on Hong Kong Christians under the tyrannical “national security law” imposed by Beijing to crush the 2019 protest movement.

The Epoch Times on Tuesday noted the fiery editorials in the Beijing-controlled newspaper Ta Kung Pao “resemble a denunciation campaign of the kind portending a new crackdown by the Chinese Communist Party,” including one article that essentially accused Hong Kong bishop emeritus Cardinal Joseph Zen of being a subversive in league with jailed media tycoon Jimmy Lai.

Lai is Catholic, as is pro-democracy legislator Martin Lee, who is also under arrest. Lai was sentenced to 14 months in prison for “inciting riots,” a charge Ta Kung Pao strongly hinted Cardinal Zen was equally guilty of. 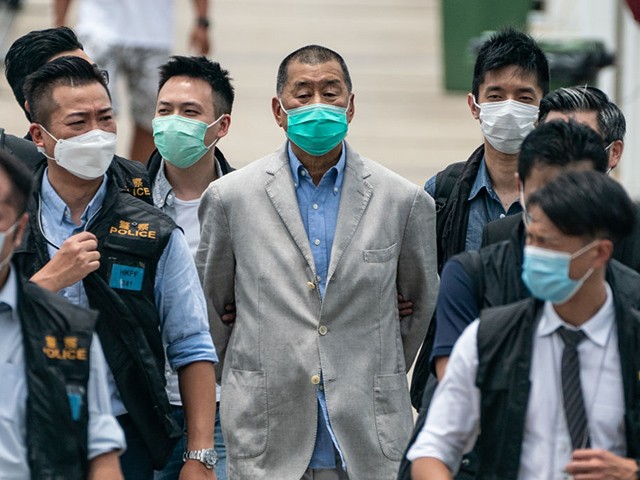 Hong Kong media tycoon and Apple Daily founder Jimmy Lai is escorted by the police to the Royal Hong Kong Yacht Club Shelter Cove Clubhouse for evidence collection as part of the ongoing investigations on August 11, 2020, in Hong Kong, China. Lai was arrested on Monday, along with several of his family members and associates, for alleged collusion with foreign forces under the new national security law. (Photo by Anthony Kwan/Getty Images)

The Chinese Communist-directed editorials reportedly compared Christianity to the Falun Gong, a spiritual movement the Chinese government has marked for obliteration, and suggested Christian churches in Hong Kong are a secret training network for pro-democracy subversives.

“It is difficult for the government to regulate or eliminate these religious groups or individuals, despite the fact that they have committed many crimes,” the Ta Kung Pao editorialists sighed theatrically.

“The spate of articles also raises the question of whether the CCP is planning an imminent takeover of Hong Kong’s Christian schools, along with directing reprisals against the cardinal,” the Epoch Times warned, quoting an anonymous Hong Kong cleric who feared the government would go after a large number of Christian schools on the island as the opening salvo in an attack on the Church itself.

Freedom of religion is another right Hongkongers have long enjoyed that was denied to the Chinese, thanks to the promises Beijing made when taking control of the city from the United Kingdom in 1996. Unfortunately, none of those rights is looking very healthy today as Hong Kong’s autonomy is relentlessly attacked by the Chinese Communist Party.

In China, churches have been aggressively “Sinicized,” infusing them with Chinese Communist ideology and crushing churches that do not accept the control of the Chinese state. The sudden Chinese Communist Party media offensive against Hong Kong’s churches suggests “Sinicization” may be coming for them as well. All four of the Ta Kung Pao articles approvingly quoted calls for greater government regulation of Hong Kong churches using various bureaucratic instruments.

On Monday, a coalition of Christian and Catholic groups asked Hong Kong Chief Executive Carrie Lam to drop the charges against Jimmy Lai and other activists jailed under the national security law.

Catholic priest Franco Mella, a signatory to the petition, noted Lam herself is Catholic and called on her to seek amnesty for the imprisoned pro-democracy activists in accordance with her conscience.

Mitch McConnell explains why he will still support Donald Trump Two lawyers who served at the most senior level in the Trump White House are today set to talk to the committee investigating events leading up to the 6 January insurrection. Former White House counsel Pat Cipollone and his onetime...

New Zealand Court Rules Suspect Can Be Extradited To China

WELLINGTON, New Zealand (AP) — New Zealand’s top court on Wednesday ruled a man can be extradited to China to face a murder charge — a landmark judgment that goes against the trend set by most democratic nations.In a 3-2 decision, the Supreme Court found that China was able to...

War in Ukraine 'far from over', says Joe BidenPresident Joe Biden announced new gun regulations on Monday to rein in so-called “ghost guns” – privately made firearms without serial numbers that have been used in several high-profile violent crimes.Mr Biden also nominated Steve Dettlebach, an Obama-era US attorney, to run...

(Getty Images)President Joe Biden is expected to announce new gun regulations on Monday to rein in so-called “ghost guns” — privately made firearms without serial numbers that have been used in several high-profile violent crimes.Mr Biden is expected to nominate Steve Dettlebach, an Obama-era US attorney, to run the Bureau...