BECKET — Jacob’s Pillow Dance has announced 26 more events to its 90th anniversary season, including a season-opening gala on June 18, a special two-day engagement with choreographer Loni Landon and harpist Mary Lattimore, four free showcases by performance ensembles at The School at Jacob’s Pillow, and 20 additional one-night-only performances throughout the summer.

The outdoor Henry J. Leir Stage will host these “one-nighters,” which will range from ballet and contemporary to powwow dances, hip-hop, house, tap, hustle, flamenco, zapateado, classical and folk styles, and more.

The pre-sale period for Jacob’s Pillow members has begun, and tickets go on sale to the general public Wednesday, April 6.

PITTSFIELD — Berkshire Community College (BCC) welcomes prospective and current nursing students to a free meet & greet on Tuesday, March 15 at 2 p.m. The session will be held in Room 110 of Hawthorne Hall, located on the main campus. To register for the event, click here.

Dean of Nursing Lori Moon will offer an overview of BCC’s various nursing programs, including the Practical Nurse certificate program that serves as a precursor to becoming a Licensed Practical Nurse (LPN); the Associate Degree in Nursing/Registered Nurse (ADN/RN) program; and the Bridge program, which transitions current LPNs into the ADN/RN program. Questions from students are welcome.

Moon will be joined by representatives from Advising/Admissions and Financial Services, who will explain the steps necessary to apply to the nursing program and explore financial aid options. The application deadline for the fall ADN program is Friday, April 1.

BENNINGTON, Vt. — Poetry at Bennington, an endowed program of short-term residencies that brings established and emerging poets to Bennington College for public readings and close work with students, has announced its Spring 2022 lineup of featured poets.

This spring, the series returns to in-person programming, with an option to attend remotely via Zoom. All events occur from 7–8 p.m in Tishman Lecture Hall on campus and are free and open to the public. Visitors are required to wear a mask while on campus, fill out the Guest COVID Vaccination Protocol form, and be prepared to show their vaccination card.

On Wednesday, March 16, poet and translator Ilya Kaminsky will read from his poetry. Kaminsky is the author of the poetry collections “Deaf Republic” (Graywolf, 2019), a National Book Award finalist, and “Dancing in Odessa” (Tupelo, 2004). Born in the Soviet city of Odessa (now in Ukraine), Kaminsky lost most of his hearing at the age of four after a doctor misdiagnosed mumps as a cold. The editor of several anthologies, he is the Bourne Chair in Poetry at Georgia Tech.

On Wednesday, March 30, Douglas Kearney will read from his poetry. Kearney is the author of seven poetry collections, including “Sho” (Wave Books, 2021), which was longlisted for the National Book Award and is a finalist for the PEN/Voelcker Award for Poetry, and “Buck Studies” (Fence Books, 2016), winner of the Theodore Roethke Memorial Poetry Award and the CLMP Firecracker Award for Poetry. Kearney is the 2021 recipient of OPERA America’s Campbell Opera Librettist Prize; his operas include “Sweet Land” (the Music Critics of North America’s Best Opera of 2021), and “Comet / Poppea,” commissioned by the American Modern Opera Company. He has received a Whiting Writer’s Award and a Foundation for Contemporary Arts Cy Twombly Award for Poetry. He teaches creative writing at the University of Minnesota–Twin Cities.

On Wednesday, May 4, Aditi Machado and Jane Wong will read from their poetry. Machado is a poet, translator, and essayist from Bangalore, India. Her second book of poems, “Emporium” (Nightboat, 2020), received the Academy of American Poets James Laughlin Award. Her other works include the poetry collection “Some Beheadings” (Nightboat, 2017), winner of the Believer Book Award, and a translation from the French of Farid Tali’s “Prosopopoeia” (Action Books, 2016). A former poetry editor for Asymptote, she teaches at the University of Cincinnati.

Wong is the author of the collections “How to Not Be Afraid of Everything” (Alice James Books, 2021), longlisted for the PEN/Voelcker Award for Poetry, and “Overpour” (Action Books, 2016). Her memoir, “Meet Me Tonight in Atlantic City,” is forthcoming from Tin House in 2023. Wong is an associate professor of creative writing at Western Washington University.

On Wednesday, May 11, Paisley Rekdal will read from her poetry. Rekdal is the author of six books of poetry, most recently “Nightingale” (Copper Canyon, 2019), which rewrites many of the myths in Ovid’s “Metamorphoses.” Her nonfiction works include “Appropriate: A Provocation” (W.W. Norton, 2021), “The Broken Country: On Trauma, a Crime, and the Continuing Legacy of Vietnam” (University of Georgia Press, 2017), “Intimate: An American Family Photo Album” (Tupelo, 2011), and “The Night My Mother Met Bruce Lee: Observations on Not Fitting In” (Vintage, 2000). The recipient of fellowships from the Guggenheim Foundation, the Amy Lowell Fund, and the NEA, Rekdal is a Distinguished Professor at the University of Utah and serves as Utah’s Poet Laureate. 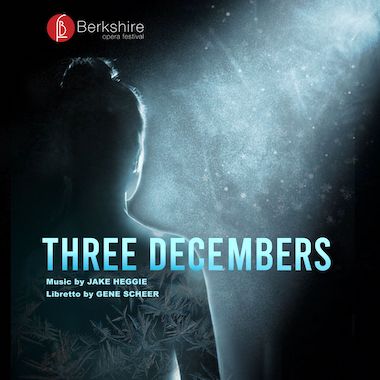 GREAT BARRINGTON — Berkshire Opera Festival (BOF) announces its 2022 season, with performances to be held in Great Barrington and Pittsfield, and for the first time in Chatham, New York.

Last summer, Berkshire Opera Festival mounted a major “Falstaff,” launched its Second Stage, planned strategically for the future, and grew its board of directors. BOF moves full steam ahead in 2022. It will join forces with PS21 in Chatham, New York, to present a new production of Jake Heggie’s intimate “Three Decembers” on July 21 and 23, conducted by Christopher James Ray and directed by Beth Greenberg. This contemporary American opera is based on Tony Award-winning playwright Terrence McNally’s original script for “Some Christmas Letters.” The story, which takes place over two decades during the AIDS crisis, follows Broadway star Madeline Mitchell and her adult children as they struggle to connect and heal old wounds while family secrets are revealed. This marks BOF’s second Second Stage event, following Tom Cipullo’s “Glory Denied” last summer.

Next, the Festival heads to the Berkshire Museum in Pittsfield on August 10 for High on the Ramparts, a free concert that will spotlight a wide swath of works by Black composers.

Finally, on August 20, 23, and 26, the season will culminate with the summer’s most ambitious undertaking: a new staging by Jonathon Loy of Mozart’s comedy-tragedy masterpiece “Don Giovanni” at the Mahaiwe Performing Arts Center in Great Barrington, with Brian Garman conducting the BOF Orchestra and Chorus.” Don Giovanni,” often considered to be Mozart’s greatest work, tells the story of antihero Giovanni’s demise. This production was originally scheduled for BOF’s 2020 5th anniversary season, but was cancelled due to the pandemic. In a quick pivot, the cast collaborated on a virtual concert recorded in their homes and studios, which streamed in August 2020. The majority of this original cast returns to present the opera in person this summer.